Yes, Kylie Jenner recently admitted to having injectable lip fillers. And according to recent headlines, she’s just one of thousands of teens turning to cosmetic surgery to enhance her appearance. Is this the beginning of a growing trend among teens? And more importantly, as a parent, should you be concerned?

In an interview with the Press of Atlantic City, Dr. Davis recently confirmed that the number of young people he sees for cosmetic treatments has grown during the 30 years he’s been in practice. However, when you look at the whole picture, to say that this is a “trend” isn’t really that accurate.

According to the American Society of Plastic Surgeons, in 2014 patients between the ages of 13 and 19 made up less than 2% of all patients who had a cosmetic surgery procedure and less than 4% of those who had a minimally invasive procedure.

The reality is that there aren’t that many teens having cosmetic surgery, despite the media hype.

As Dr. Davis explained to the media source, he uses a risk-benefit ratio with each young patient to determine if he or she is an appropriate candidate for a specific treatment. A good risk-benefit ratio “would be fixing something with minimal scaring, recovery time or risk of anesthesia, and also knowing it would make a client feel better about themselves.” On the flip side are patients who want to look like a celebrity, or a parent who seems to be pushing their child into having a procedure. Neither of these situations indicate good candidates for treatment.

As part of the determination process, Dr. Davis has a minimum of two consultations with any patient in their early 20s or younger before scheduling a procedure. For patients under the age of 18, he requires parents to be present during consultation.

Of course, what we all want to know is, what is it that’s driving young people into the plastic surgeon’s office? Here’s what most teens had last year:

Learn more about the procedures performed by Dr. Davis.

See the full article: “Should teens get plastic surgery?” 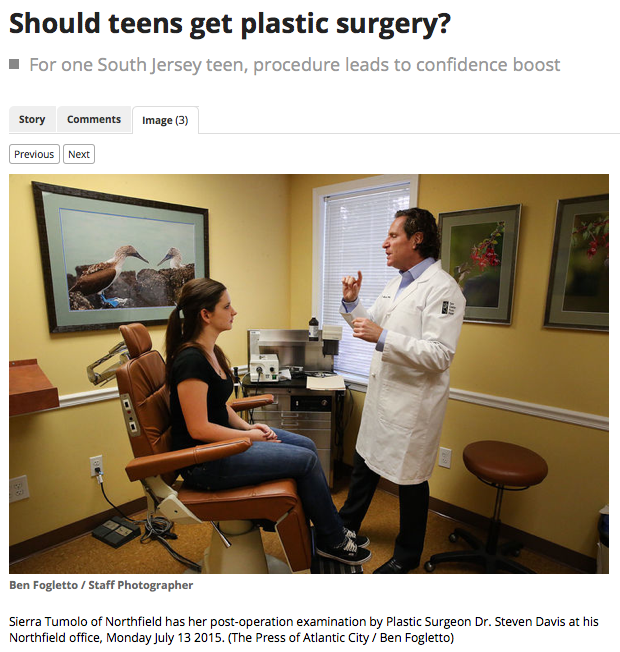